Support for multiple triggers per table for the same value of action/timing.

For a long time MySQL server supported only one trigger for every action (INSERT, UPDATE, DELETE) and timing (BEFORE or AFTER). In other words, there could be at most one trigger for every pair (action, timing). It means that a user couldn't assign for example two BEFORE INSERT triggers for the same table t1. To workaround this restriction and allow several actions to fire on some table event, a user had to implement several stored procedures (one for each activity that would be implemented as independent trigger), create trigger for a table and call this stored procedures from the trigger. As of MySQL 5.7.2 this limitation has been removed. It means that starting the MySQL 5.7.2 a user can create for example, two BEFORE INSERT triggers, three AFTER INSERT triggers and four BEFORE UPDATE triggers for table t1. And this triggers will be called in the prescribed order determined (in generally) by the sequence in which triggers were created.

As you can seen the numeration of attribute ACTION_ORDER is independent for every pair action/timing.

ACTION_ORDER values are used by server to control the order of trigger execution. Server executes triggers in the ascending order of ACTION_ORDER values. Since ACTON_ORDER is implicitly calculated by the server, it implies a number of important consequences:
Attribute CREATED is pure informational attribute. Its values isn't take into account during triggers execution. mysqldump doesn't preserve trigger creation timestamps. Replication preserves CREATED attributes.

MySQL Server supports extension to SQL-Standard that allows to set trigger execution order based on position of new trigger against other table triggers. Namely, it was introduced the following clauses from the statement CREATE TRIGGER:
Those clauses allows to set explicit triggers execution order based on location of trigger being inserted relative to other triggers:

Currently triggers are stored in TRG (TRN) files. Main definitions are stored in the TRG-file (format: <table name>.TRG). This is a plain text file, having the following structure:

To support persistent storage of creation timestamp for triggers the new attribute 'created' was added  to the TRG file. This attribute contains a list of timestamps for every trigger assigned to the table.

The MySQL server before 5.7.2 threw ER_NOT_SUPPORTED_YET (1235 / 42000) if the user attempted to create more than one trigger with the same action and event for one table:

ERROR 1235 (42000): This version of MySQL doesn't yet support 'multiple
triggers with the same action time and event for one table'

As of 5.7.2 this message isn't appear any longer. The error message itself (ER_NOT_SUPPORTED_YET) will of course remain.

21 new MTR tests were added during implementation of new functionality. These test are public and reside in mysql-test/t/trigger_wl3253.test and mysql-test/suite//rpl/t/rpl_trigger.test. Implemented changes were covered for 89.7% by these tests.

Implementation of triggers support was significantly refactored during adding support for multiple triggers per table for the same action/timing. The figure below depicts the major classes involved in support of triggers in MySQL server. 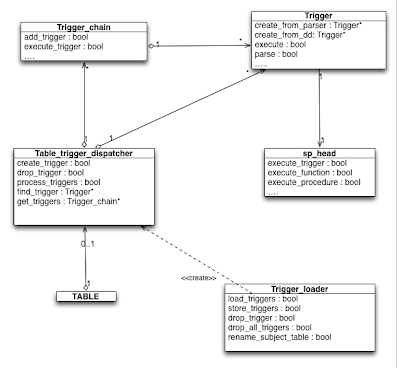 Main activities related to triggers can be categorized as loading triggers from Data Dictionary, handling statement CREATE TRIGGER and executing triggers assigned to a table.

Lets describe in short every of this activities.

When user executes some DML statement for that there is assigned triggers, server does the following steps:
Posted by Unknown at 5:54 PM

Email ThisBlogThis!Share to TwitterShare to FacebookShare to Pinterest
Labels: MySQL